skip to main | skip to sidebar

Before we start looking at diary pages, here's a very cool photo -- made easier to see by tapping on it with cursor to enlarge it, as is true for any other page or image here, always:

Who could this group be, posed in front of their homestead -- in Canada ? Paulsen & Rasmussen readers might recognize the two adults on either end of the back row as Lena (Paulsen) and husband Ras Rasmussen then visiting the Fredlund family up north. Father Johan and Mother Johanna Fredlund are seated. Between them stands their only daughter, Mathilda F. Ogren whose mustachioed husband Charles Ogren stands behind his father-in-law; seated on grass by his grandpa is Hjalmer Ogren and his sister Selma is tallest child standing at right. I believe the fellow by door with arms crossed to be son John F. and standing behind his mother, Anton F. -- but I wouldn't bet the farm on it. IF the three youngest are Lena-Ras kids -- Elna (7, big hairbow) seated on grass, Mae (5) holding Selma O's hand and Ernest (2) on grass at faded far right -- the photo could have been taken about 1905 which fits the Fredlund homesteading timeline as well. We don't have access to MaryOP's circa-1905 diary so I can't check for mention of a trip far north for Lena PR's family. Anybody reading out there who has the 1905 book?
These Fredlunds (plus two younger sons) are they who left Towner Co. ND for Canada in the early years of the 20th century. The two older Fredlund sons Carl and Sander aren't in this photo. Having already married into the Paulsen/-son family they live and farm with their young families near Cando/ Egeland. Mother Johanna was a dear friend of our MaryOP. The Fredlunds appear a lot in the diary this month... thus the Fredlund family photo feature found at end of this month's post.
_______________________
1910:

MaryOP is sadly and dangerously sick all the month of June and is housebound. Her reduced cash-flow depicts her confinement -- perhaps only sending her offspring on errands downtown. I see no payments yet for the doctor's nine visits in June, below: 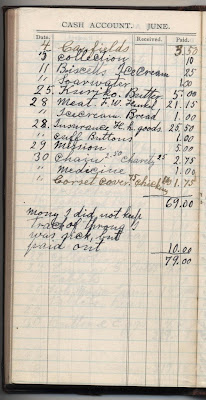 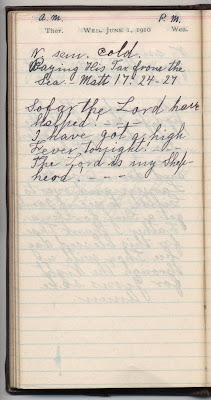 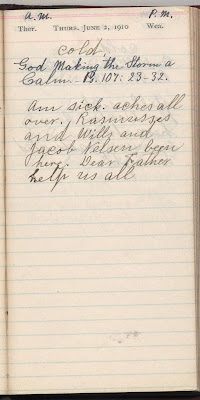 You can see above (esp. while she's ailing) a contrast in handwriting 'strength' and tool of her day's comments & weather vs. the darker Bible reference & study topic. Clearly, MaryOP entered in advance the 365 scriptures and their topics {plus a.m. and p.m. designations at top} at the start of the year -- then added freshly the weather notes and events as they occurred daily. Her day's visitors are local second eldest daughter Lena and husband Ras+, eldest son Will and wife Olga from Bisbee, and Olga's father Jacob Nilson, also from Bisbee. Even a throat infection or flu could easily end in death in those days and so many family members will visit to see her again, help out and cheer her. 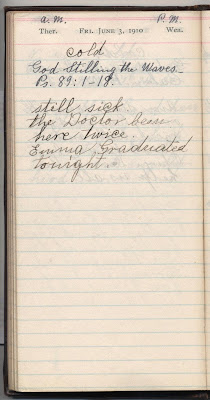 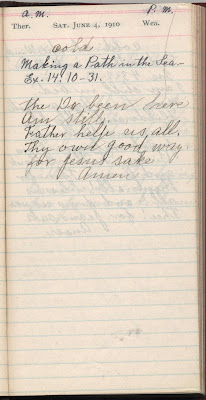 Word 'sick' is missing above after the word 'still.' 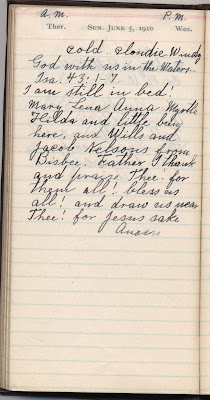 Wow -- a crowd of attenders, some of whom are seen in 1901 photo below. Mary, Lena and Anna are the adult daughters standing L. to R. in the back in same order she lists them. Daughter-in-law Myrtle (wife of Fred, in back, 4th from left; see photo for June 18), Hilda Rasmussen (wife of Ras' bro Will R.) plus the Bisbee contingent of eldest son Will Paulsen (2nd from right, back) & wife Olga and Jacob & Kjirstine Nilson (parents of Olga) all come this day to help and cheer her. 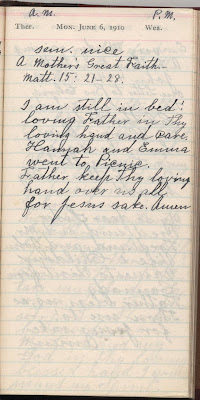 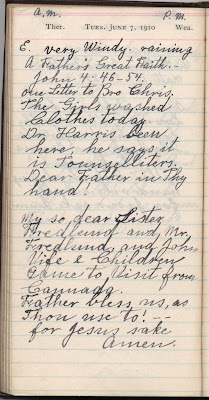 A letter is written to her brother Christian A. Olsen. By 1910 her parents Ole & Henriette Olsen and her two sisters Marie (Minnesota) and Petrine (Denmark) have died; brothers Chris and Ludvig remain. Tonsillitis is the (then) scary diagnosis. By 1910 G.P. Doc Francis C. Harris (51) has been practicing in the area for 14 years. This is the last solid rain they get 'til the end of June -- 22 days! -- with very high heat and strong winds to assuredly evaporate any remaining land moisture; a big worry for farm owner MaryOP, in addition to her health problems. "Father bless us, as thou used to!" 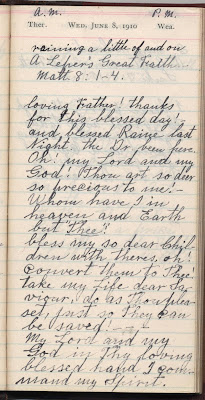 I believe she thinks she might die -- and asks blessings on her many children for their salvation. Then into His hands she commends her (own) Spirit. It's written 'command' but with her no-shrinking-violet nature perhaps command works as well. 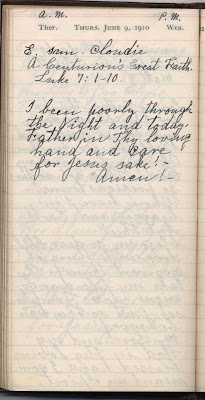 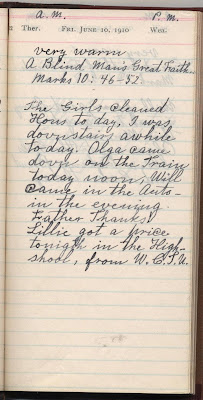 What a relief it must've been to leave her sick-room! Daughter Lillie gets a prize from Women's Christian Temperence Union, the anti-liquor activists. She could be an active member as is her mother. 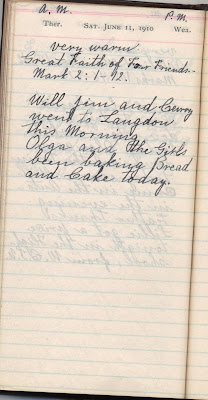 Langdon town is quite a trip E.N.E. of Cando but likely traversed in Will's new auto. Jim is husband of MaryOP's daughter Anna, seen below. Any ideas of who Cenry/ Cursy/ ? might be?

Will and Olga are the usual chaperones for this courting couple -- Edwin Nelson (23, Olga's first cousin) and Lillie Paulsen (19, Will's sister.) 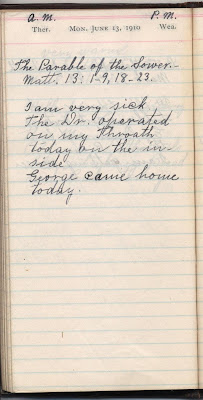 An image of MaryOP's 10th born George (21) is seen below as cropped from 1909 (wedding) photo. He has a farm adjacent to and north of MaryOP's farmland in southern Twin Hill Township. 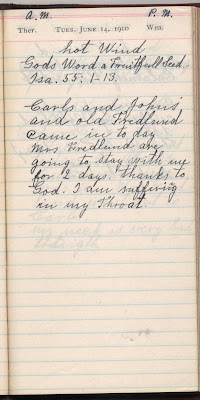 Brothers Carl and John Fredlund and their young familes come to help and visit as do the lads' parents. Mrs. (Johanna) Fredlund and MaryOP were dear friends for quite a while. [See Fredlund photo display at the end.] They'd meet, study Bible, sing hymns, and more. 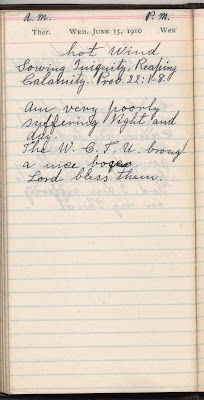 A cheery bouquet of flowers from her pals in the Temperence Union. Good therapy. 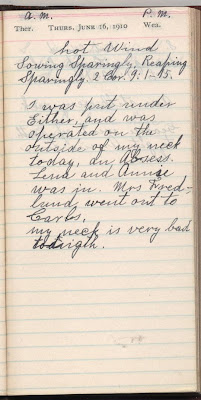 Ether as surgery anesthesia for an absess on her neck. What next? 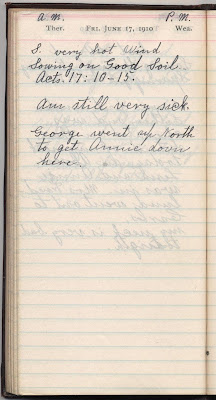 MaryOP needs more help so George fetches his wife Annie down from their farm. 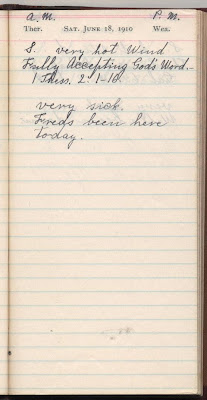 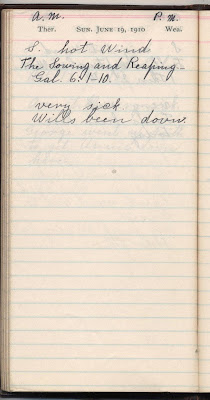 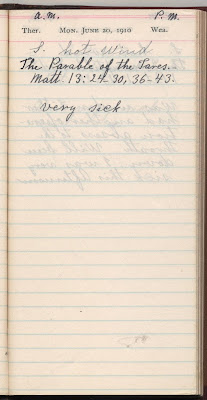 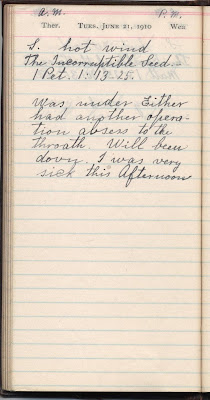 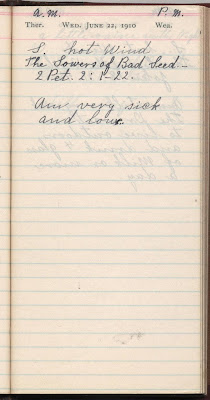 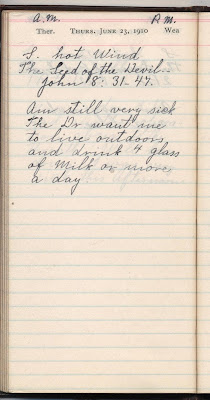 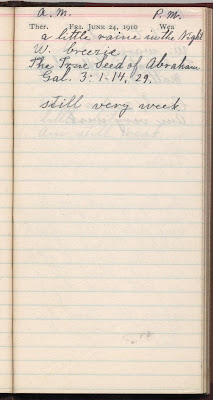 That was just a teasing of rain - - 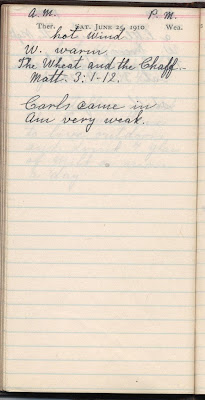 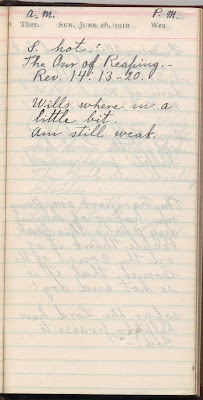 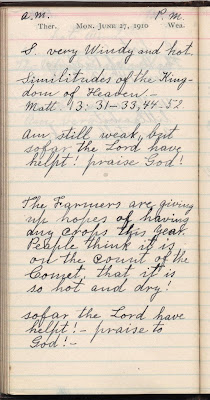 Looking for a cause of the weather scourge - - Haley's comet? 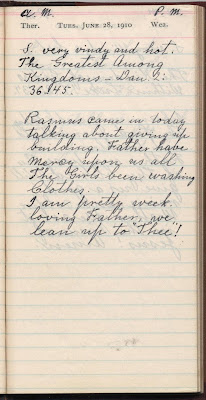 Ras & Lena are/ were building a new and Big farmhouse on the site of the burnt one. I should've included the cool photo of it -- but oops, didn't. (See the forthcoming/ July photo feature re: Rasmussens.) 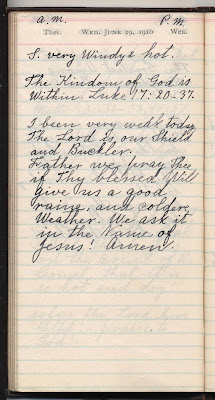 Her fervent beseeching for rain will be answered -- within 2 days. Stay tuned -- 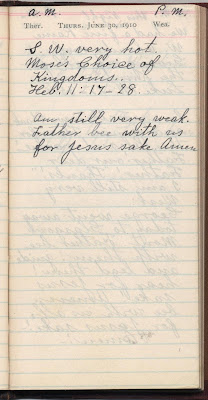 In the Fredlund family studio photo, below, taken approx. 1896 in Cando, the parents Johan and Johanna Fredlund are surrounded by their six sons. Daughter firstborn Ida Mathilda was away in I think Kansas at the time of the photo, so Shirley Woodhall (Sander Fredlund descendant) added Tilly's face. Back row, L to R : Mathilda, Anton, Sander, Carl and John; in front, Henning and Noah. These seven were born in Sweden, 1870-1886. The parents-- Johan (1842 Smoland Sweden--1918 Saskatchewan Canada) and Johanna (1847 Smoland -- 1931 Saskatchewan)

Thanks to Shirley Woodhall and Fredlund cousins Kenn Woll and Glenn Knudson for the collection of wonderful photos!
Here's a 1909 plat map of Victor Township, Towner Co., ND -- where most of the Paulsen extendeds lived and farmed. [I recommend you cursor-tap on the image below to enlarge it for eye ease.] Brothers Carl and Sander Fredlund and their families live in Sections 18 & 19, 2 & 3 like bookends around the various Paulsens. (MaryOP's farm land which was farmed for her by others is in Hill Twp, just north of Victor Twp, as is George's. Will & Olga had farmed a few miles west of Carl & Mary Fredlund, in Lewis Twp. but by early 1910 lived and worked in Bisbee.) Carl farms the land homesteaded in circa 1889-90 by parents Johan and Johanna Fredlund of Smoland, Sweden and their family.
Two many Johnsons in US town? Fredlund chosen for name -- some significant thing or place or person in Sweden? Names were much more 'fluid' back then.

Here's a classy studio image of Johanna. She was of royalty in Sweden, but didn't care to make much of that.

Next, Mother Fredlund at ease. The back of this photo has an inscription in Swedish written by her to son Henning. Note the Fredlund family studio photo hanging behind her -- the photo we saw four images earlier ^ ^ ^ made when the family was geographically intact.


Mathilda married Charles Ogren (always seen with a big moustache) in Kansas and their children were Hjalmer and Selma, with them below.

Taken the same day as the photo above, next is a four generation photo of Great Grandma Johanna Fredlund, Mathilda F Ogren, Selma O, Clayton and her baby Alice.


Karl (Carl) Albin -- notice that all six sons have middle names starting with 'A,' as did their father -- is the Fredlund who most locally found his mate, Mary Henriette Paulsen (1876--1971), eldest adult child of MaryOP and Albert. Carl and MaryHP married in 1897.

Their two children are Jalmer and Nellie. Nellie is mother of Kenn Woll, a vast contributor to the photos and history. The family is seen below in 1907:

His batchelor photo, above; in 1901 he married Mary Miller (1880--1918), the niece of Albert Paulsen and daughter of MaryOP's friend, Dorothea P. Miller of Blooming Prairie MN. There were SO MANY Marys in this family that this Mary was distinctively dubbed 'Mary Sanders.'

Sander and Mary Sander had five children: Victor, Clara, Myrtle and Vivian; that's four. In 1918 their fifth was born but, tragically, Mary Sanders died in childbirth (age 38) as did the baby. The four children were ages 3 through 16 at the time of their mother's death. Sander never remarried and raised the four children on his own, west in WA. Here is the family in 1915, in their parlor near Egeland ND soon after the birth of Vivian:

Luckily, their granddaughter Shirley Woodhall (Myrtle, seen on Sander's knee above, will become mother of Shirley) has shared many photos including this of Sander and Mary Sanders in their buggy and one of Sander wearing his favorite, comfortable overalls.

5. Sven Anton Fredlund (Anton) 1879--1965
Anton is one of the Fredlund crew who lived in Canada, emigrating after the turn of the century. Here he is as a dandy batchelor and next as he married Hanna Katarina Stromgren; they had a family but I'm not sure who.

____________
6. Henning Adrian Fredlund 1883--1969
The only photo I can scare up of Henning is when a youth, simply cropped from the family studio photo. In it, Henning seems to have paper money stuffed into his jacket pocket -- but I highly doubt it! If anyone reading this has access to other photo(s) of Henning, do advise me. He did grow up further in Canada and married Sara Stromgren, sister of Anton's wife. Another example of siblings marrying a nearby family's siblings-- quite typical then especially in rural areas -- and the cousinhoods become as complex as a Celtic knot. We see plenty of these crisscross patterns among our Paulsens, Rasmussens and Nelsons, too.

I don't know much about this youngest Fredlund sibling -- we see him in lower righthand corner of their family studio with a very funky big neck-bow -- but he grew up in Canada with parents and bro Henning. Here he is at time of his marriage to Jordi Lilli Marie Christofferson.

That's it for the June posting. Next month with July's diary I'll include a photo feature on the Rasmussen family.
------ Until then, Marsha Paulsen Peters
mapptree@gmail.com
I welcome all comments, corrections and applicable Old photos. Thanks!

Posted by Marsha Paulsen Peters at 4:13 PM No comments: